To start the event, the terrifying Crows may greet you on the bridge.  Throughout the night, they move around the park to various locations, lurking in the darkness and scaring the guests that they see.  The subtle, clockwork, robot-like movements give the crows an eerie stance and make the viewers unaware of when they will pounce.  The Crows will take statue onto the crosses around the park, making guests unaware if they are real or not.  The show-stealer is the incredible masks, all made in house, some inspired by famous horror movies.  The gloves worn by each of the crows has straw for adding length and the pointing from the Crows add creepiness to the costume.   The costumes all vary slightly but have a cohesiveness together, fitting in well and looking just like scarecrows.  Even when the crows are running the movement is perfectly scary.  We can't wait to come back and see where the crows are hiding next!

Roots of Evil, the new maze for 2020, takes beloved parts of past mazes from Fright Nights throughout the years and combines them together.  This year, you must go in your group size to prevent contamination and maintain distancing.  We found that this was easy to do throughout the maze as groups are spread out and in open space.  Starting in the old Jungle Escape building (the twist that we did not expect this year!) Roots of Evil introduces the story with a speech about the government locking down the area to ensure that research continues into the undocumented part of the forest, prompting the guests to go and find Doctor Ash to continue the mission.  The building has been transformed into a research laboratory, using old themeing from Containment.  Walking out of the building, you are then told to talk to the Captain about chloroplast and enter a military base zone.  From there, you are taken into the entrance of the forest with jump scares from tree monsters.  The maze leads you through winding trees, with UV lights and workers that have been infected by the roots.  Throughout the maze there plenty of jump scares and new themeing, a particular favourite of ours was the watchtower, with a military worker shouting through a megaphone.  The maze was well done but lacking an ending in our opinion, we can't wait to see where Roots of Evil goes next and have a few more run-throughs this season.  The mazes are charged at £10, which is a lot for this maze but we understand this is to reduce capacity.

The second maze at the resort this year is Platform 15, it returning for 2020 was not a surprise for this well-loved maze.  With a big twist for this year, the maze is now in reverse!  Entering through the tunnel, this is now the main queue area.  In the tunnel, there are x's marked on the cross-beams indicating where guests should stand, all being 2 meters apart.  Once entering the maze, where the finale was held last year, the tour guide explains that "the most experienced historians may notice that (they) have altered their tour." They once again tell the story of the conductor that has disappeared and that going on the tour will help you find out what has happened.  Guests are now lead into a dark forest, being left on their own to explore.  You start by crawling into a tunnel and are greeted by some locals that seemed to have gone delirious, explaining that "there's something in the house".  As you walk through the maze, you encounter more possed people and walk through the village.  After walking over the bridge you begin to encounter the Sleepers, coming out of the Sleeper Express, it finally becomes clear what has happened to the conductor.  The train has switched positions and the front of the train is now laying on its side, going up in flames as you walk by.  You continue to encounter Sleepers and notice the old huts which were once kept on the beach, saying "Platform ahead" and "Platform still ahead".  Just as you think the maze is going to end, through the old entrance, you're greeted by another tour guide saying that you have reached the end of your journey, directing you through the tunnel to the end of the journey.  However, it does not end there,  you continue to be followed by sleepers and meet the conductor, in front of the front of a train with flashing lights and another jump scare.  As you exit the maze, you're then diverted into the Creek Freak scare zone, this may change as the event goes on as it may become over-crowded in this area.  This has been one of the best years of Platform 15 at the park, we are really impressed with what they have done to make the maze COVID secure.

A highlight for this year's Fright Nights Fearstival; The FEARSTIVAL Arena.  This new area clearly had a lot of work put into it, from the stage set up, to the themeing throughout the area.  You are introduced to many new characters, unique to this year's Fright Nights.  Each character has their own individual back story as to how they ended up in the Fearstival and their special talents.  We had our fortune read by the Fortune Teller, explaining that there are spirits present and we need to be wary and stay in our groups.  Other characters that we met were a magician, strong man and ghosts.  The show-stealer was the fire show.  As the music began the characters in the area all knew what was happening and got excited, as fire began to come from the top of the stage in five areas.  The fire erupted in time with the music and smoke was pumped throughout the area.  We are looking forward to returning to the area to watch more of the shows and meet new members of the Fearstival.

A crowd favourite of last year, CREEK FREAKS: UNCHAINED returns in a new and exciting way.  Amazingly, the whole area of Old Town was transformed overnight into a terrifying scare zone to introduce the Buckwheat family in a new way.  Throughout the area, hay bales, tractors and logs are piled, to make you feel like you've stepped into the Buckwheat's farm.  Especially at night, the red lights give a creepiness to the area.  As you wander into the entrance, you're greeted by the family, asking if you're ready to be part of the family and work alongside them on their Saw Mill. The route around the zone is clear, hurried along by the family, telling you that they want to chop you up!  The new themed areas such as Ma's Moonshine Bar and Buckwheat Supplies add a new spark to the area, fitting well with the theme and enabling guests to have a good interaction with the family members sat at these areas.  The best thing about the zone is the character interactions, throughout they recognise familiar faces and taunt you as you walk through the zone.  Grandpa Joe is sat at the exit of the old Creek Freak Massacre exit, interacting with guests as you walk by.  As you walk to the end of the zone, you're greeted with chainsaws, chasing you out and warning you to not come back.  Even though Creek Freaks: Unchained isn't as intense as last year, it is still as exciting and scary.

New kids on the block, The Howling of LycanThorpe High, created a great dynamic with guests this year.  Giving a rivalry with Amity high, vampires vs werewolves.  It was great to see a new group introduced to the line-up this year.  The costumes were fitting for the area, all sporting a variation of the blue school colours and the LT logo embroidered onto their varsity jackets.  Through their clear masks, you can clearly see the werewolf hair and teeth, although these can fog up with lots of movement.  The area is themed well, with a track pitch in-front of their school bus.  The bus has been transformed into a DJ booth, blaring out 80s classics into the area.  The whole area is cast very well, with the whole team having a certain look to them, making it more cohesive and making them look just like werewolves.  Top tip, make sure you don't tell them that Amity is your favourite, you might be chased away from the area!

The frightening vampires of Terror at Amity High is back again for a second year!  The zone is set up familiarly to last year, with a stage just in front of the launch of Stealth, this year filled with a prom table, set up with cake, drinks and a new light-up sign.  The vampires are as friendly as ever, engaging with guests as they walk past, inviting them to be best friends or asking who you're voting as prom queen and king.  Each vampire has their own personality and rivalry between the other groups of vampires in their high school.  Just like last year, there is a big flash mob, with all of the vampires congregating for a dance-off.  But with a twist this year, out of nowhere the werewolves of LycanThorpe join in the dance, having a rivalry between the two.  The start of the dance was very similar to last year, but new songs and moves are added to join the two together.

Another new scare zone for 2020, THE SWARM: INVASION.  It is nice to see this area of the park being used again for the Halloween season.  The scare zone adds excitement to the area, bringing back the original storyline of the Swarm, but this time warning guests that the end is here! Inspired by Les Cougan's forthcoming of the Swarm's invasion, activists proclaim "we warned you" and "look to the sky" as the Swarm causes mass-destruction on the island.  New characters are introduced, an alien life form in military-style uniforms with large weapons and large helmets, interrogating guests as they walk past, encouraging guests to ride the Swarm.  A highlight for this area is the use of the original soundtrack and promotional music by You Me At Six.

Although we didn't experience the Screamplexx cinema, the Director and Studio 13 crew were there to greet guests in the dome and outside the theatre.  Bringing back the original costumes and characters allows the Fright Nights veterans to have nostalgia to an old and favourite maze.  Incorporating the Screamplexx cinema and actors is a new take for this year, bringing new life to the old attraction.  We are looking forward to experiencing this in the theatre.

We had an amazing time at the press event for the Fright Nights Fearstival and it was great to experience all of the new attractions.  Merchandise for the event was a highlight, introducing pin badges and varsity jackets for both Lycanthorpe and Amity High, letting guests choose a side.  There is also a standard pin badge and old-style hoody, but we're hoping that there's new merchandise added throughout the season.  You can also purchase Fright Night exclusive face masks.  The use of masks throughout the island had no hindrance to the scares or experience of Fright Nights Fearstival.  It was clear that the park had put a lot of thought into this, giving each area masks that fit the zones which were almost unnoticeable at times.  COVID safety was taken very seriously at the event, ensuring that actors kept their distance and guests too.  The atmosphere throughout the park was still the same as usual, with lighting and music used throughout to bring that spooky feeling.  We can't wait to experience the event many more times this Halloween season. 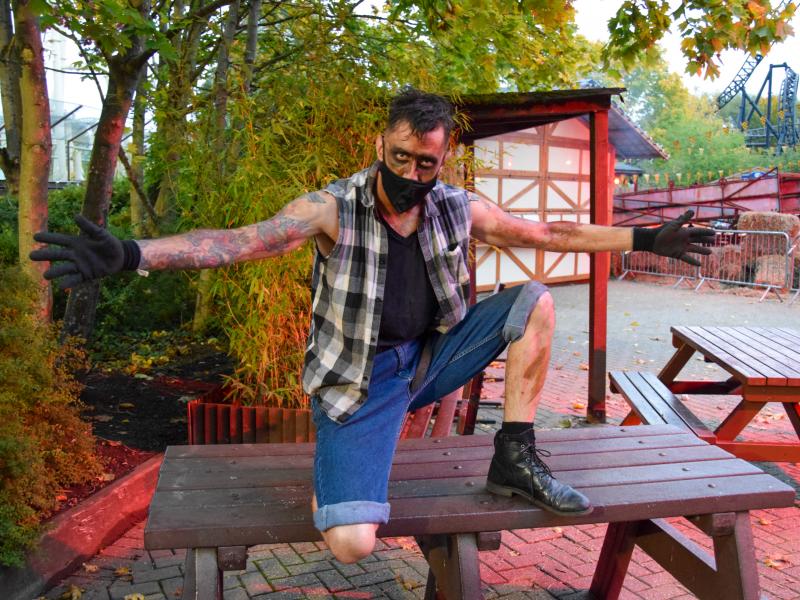 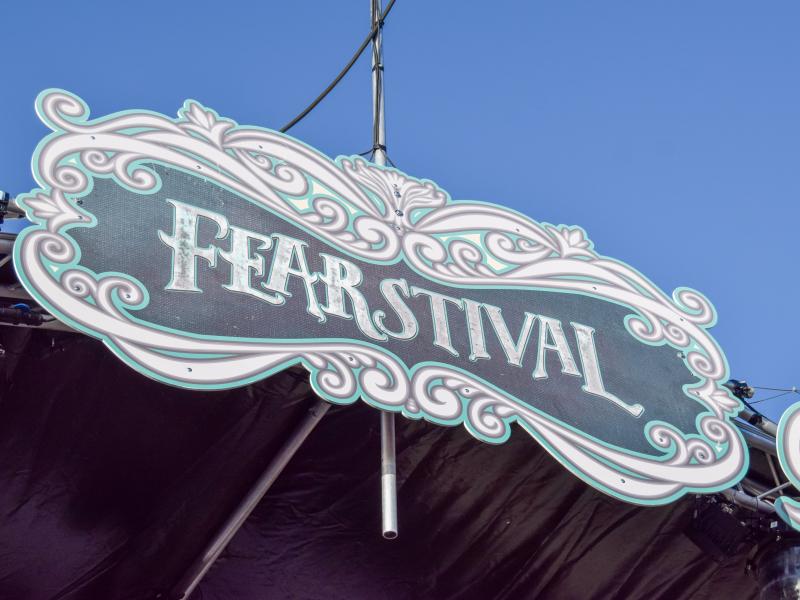 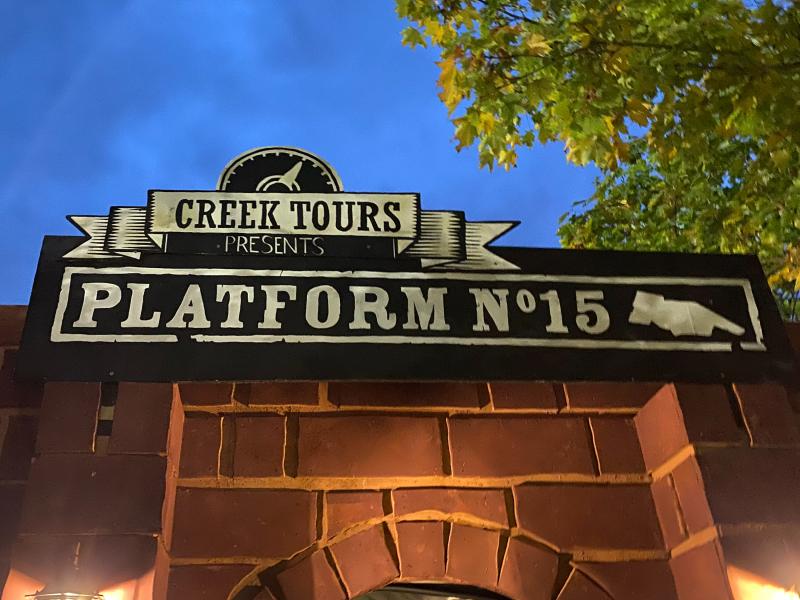 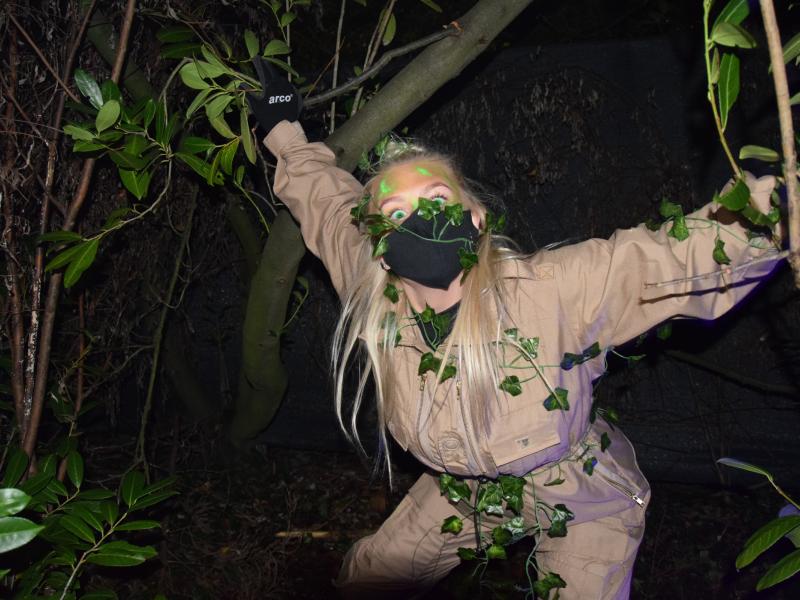 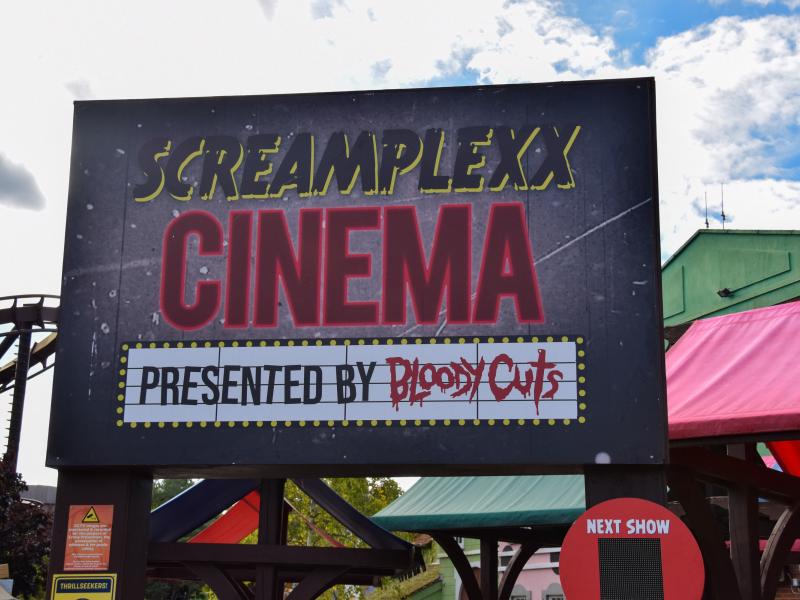 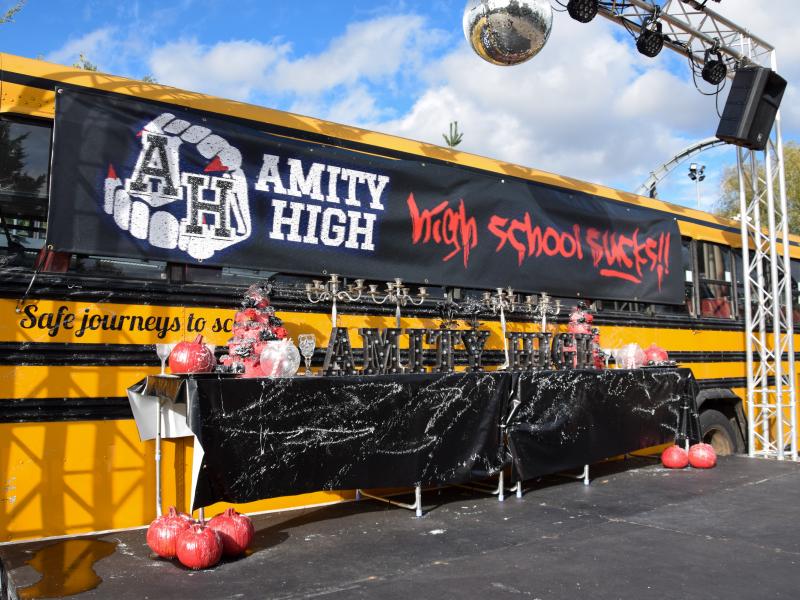 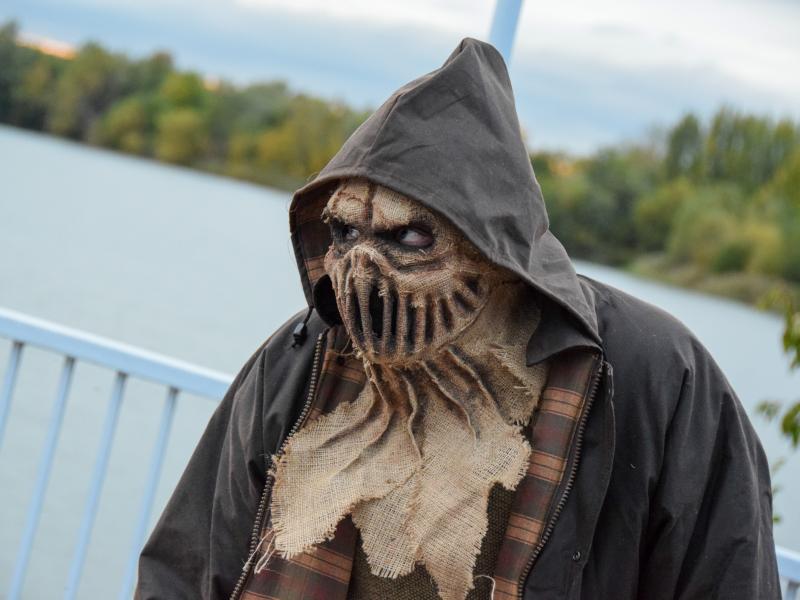 The Howling of LycanThorpe High 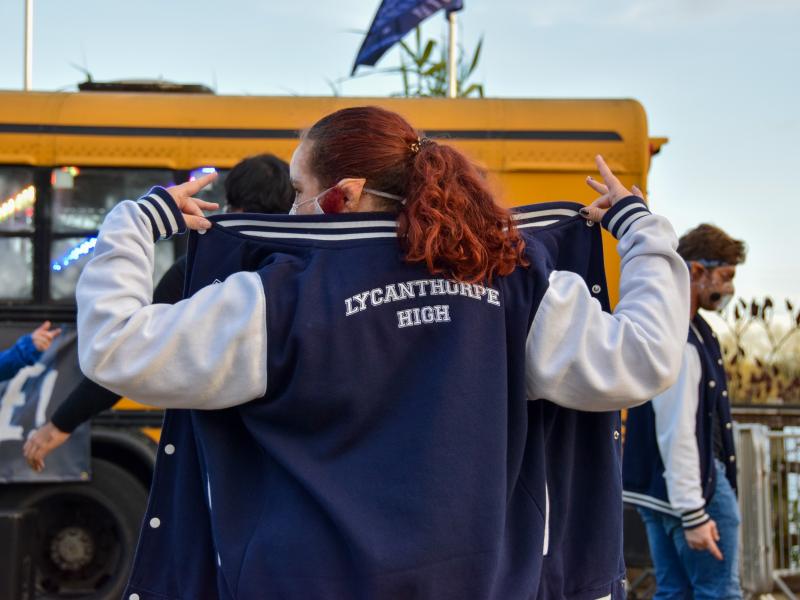 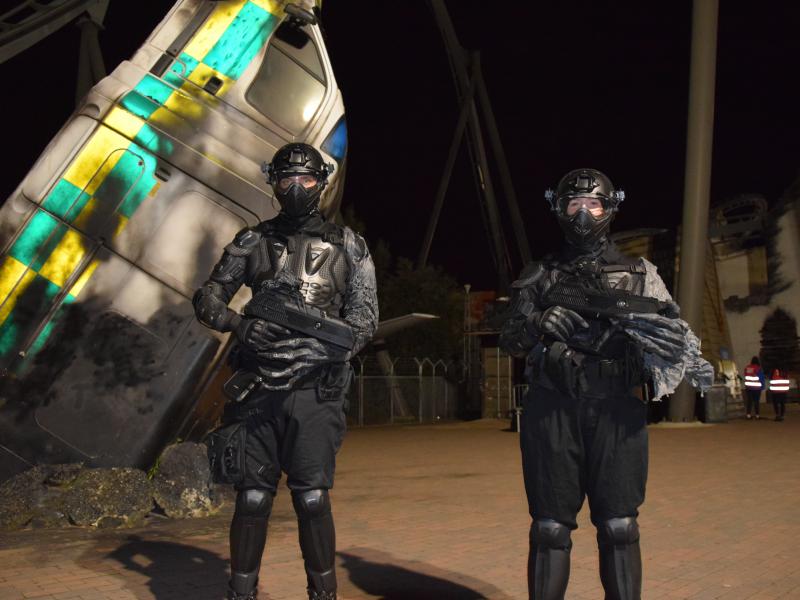