2014
Thorpe Park
Theme Park Guide were invited to the Press launch of FRIGHT NIGHTS 2014. With unlimited fastrack for the event and access to the V.I.P lounge the event was full of press representatives, famous youtubers and celebrities such as Olly Murs, Alexandra Burke and other X Factor stars.

Upon entering the park we were ushered through business reception where we picked up our FRIGHT NIGHTS information pack containing two black wrist bands which gave us access to the V.I.P lounge and fastrack along with a car park voucher, map of the park and a free photo voucher. The V.I.P lounge was located in the dome and had two giant inflatable tents one full of sofas with donuts on the table and the other which was a make shift bar. As part of the press nights package we had unlimited access to food and alcohol from the bar in the V.I.P area.

2013 saw the end of The Asylum a horror maze themed around a mental hospital however this year the park director invites guests into his latest creation Studio 13 for auditions for his next film feature film called the motel. The maze still lasts for around 8 minutes and has been completely redesigned. When news broke out that the asylum was leaving the park fans thought that it was the end of the much loved ending of the maze which featured a chainsaw however fans will be delighted to hear that the chainsaw makes a return in Studio 13.

We’ve been through the maze quite a few times now and have got to hand it to the park they have done an amazing job. Exceptions for the maze where set high with the asylum being really good, Studio 13 is full of smoke, actors  and impressive theming. The park have smashed these exceptions and have got a really good maze! When you enter the maze the first corridor has posters on the wall with a member of the studio 13 crew pointing them out talking about them being his previous creations. You are then led into the first scene of the maze where you check in with the to good to be true happy receptionist who then turns on you and tells you to go forward into the maze. The maze is full of smoke and fantastic theming with actors finding plenty of hiding places to jump out at you from. Everything about this maze is just fantastic, we don't want to ruin it for you  however the exit corridor it plastered all over with posters of the previous mazes and of course making a return is the chainsaw. Get ready to run!

Making a return Cabin In The Woods is still the best maze on park. After wining the best halloween scare attraction award at Scarecon the maze has had a few changes done to it over the last year. With the control room being moved, the forest room being changed and more effects added throughout the maze. You still have to make your choice of doors at the start of the maze however if you want to try make the most out of your time in the maze go onto our behind the scenes of  Cabin in the woods and look for the longest route section.

Previously in the maze you would get stopped half way by a lift with noise effects however the lift has been taken out and has been replaced by a small crawl through tunnel. In the replacement of the mystery control room the park have put a wedding dress in the room with a box of toys that the people in the room found to make there fate of how they were going to die. The items in this box are the actors that can be found throughout the maze so if a ball is in the box that means that Fornicus is in the maze. Well worth a visit if you get the chance!

Harry Warden is back and has taken over tunnel 5 again. With the same layout as last year the maze is being advertised as the scariest one on park possibly due to its claustrophobia inducing corridors and dark alleys. When you enter the maze you are briefed by a woman who tells you that Harry has been spotted and that you should try to avoid him at all costs. You walk into a hospital in the first room where you then get sent one of two ways. Left to go into an alley way with sheets above you or right to go down a corridor with a tunnel which requires you to crawl through it. Both ways end up at the same point in the maze where you go through an inflated air bag and then get followed out screaming by Harry Warden with a pic axe.

Jigsaw is back with Saw Alive and wants to play a game. The live action horror maze is the only maze on park that requires you to hold onto other people shoulders throughout the maze. When we went through the maze we found our selfs struggling to remember the layout which made it more fun as we had forgotten where all of the little hiding spaces where for actors to jump out at you where. The maze was always full of actors with lots of people in pig masks throughout the maze. The freezer scene was cold following the effect not working when we went in the maze last year however this year the park have got actors almost fully naked in the scene! The room just before the shot gun carousel looks like it has had some work done to it with more theming added to the roof with lights pointing at the fake swinging axe. A old but classic maze.

The Blair Witch Project received some very different reviews last year when it opened with some people saying it was rubbish and some people saying it was amazing. Our review last year said it wasn't very good however this year the walkthrough has been dramatically improved! The walkthrough has been flooded with actors and has received audio throughout the experience. The music definitely helps build up the tension in the maze. Its well worth giving it a second chance this year!

Last year the park only had around 6 roaming actors however this year there are up to 25 of them! Ranging from people in red jackets walking around the park attacking people to people in boiler suits attacking anyone and everyone with one of them walking around with a chainsaw. Check out our FRIGHT NIGHT’s highlights video for them at there worst.

With the park being open until 10pm its the best time to get some night rides in and this year has never been better with most of the riders not being fully flood lit. Meaning you can get a proper dark ride on The Swarm, Nemesis Inferno, Saw the ride or Stealth. During the night Stealth is lit up by two massive lights at the bottom of the top hat turning stealth into a multitude colours.

Fright Nights may have just started but this years is definitely the best it has ever been! 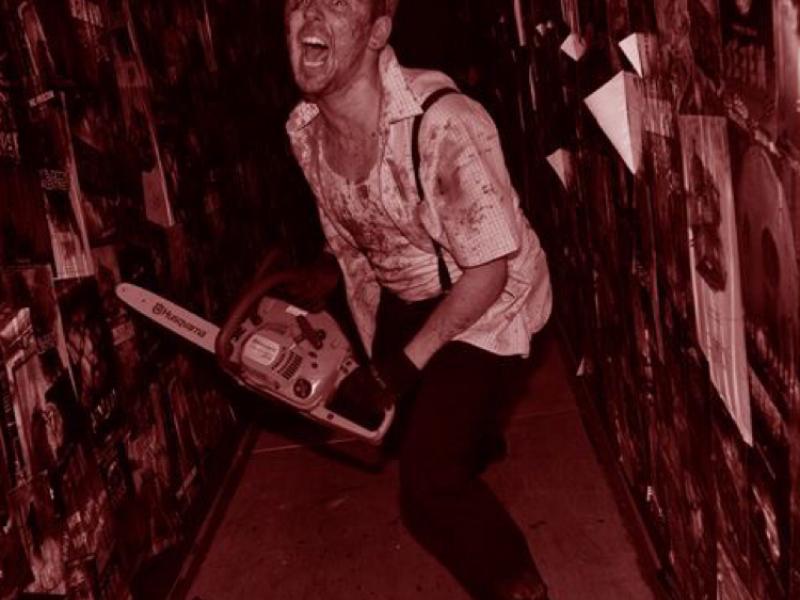